Privacy-focused web browser Brave has announced that it will soon bypass Google’s AMP pages by default.

Brave’s De-AMP feature will rewrite links and URLs to prevent users from visiting AMP pages whenever possible. In cases where this is not possible, the browser will monitor the fetching and redirecting of AMP pages before the page is rendered, preventing Google’s code from loading and executing.

In a post, the company Explain why he opposes Google AMP…

—–
Why is AMP harmful?
In practice, AMP is harmful to users and the web in general.

First, AMP harms privacy. AMP gives Google an even broader view of the pages people visit on the web and how people interact with them. AMP encourages developers to integrate more tightly with Google’s servers and systems, and penalizes publishers with reduced rankings and search placements if they don’t, further allowing Google to track and profile users .

Third, AMP promotes web monopolization. AMP encourages more of the web to be served from Google’s servers, under Google’s control and arbitrary non-standards. It also allows Google to require pages to be constructed in a way to benefit Google’s advertising systems. AMP is one of many strategies by Google to further monopolize the web and create a web where users serve Google, instead of websites serving users.

De-AMP is now available in the Each night and Beta versions of Brave and will be enabled by default in upcoming 1.38 Desktop and Android versions. An iOS update will arrive shortly after. 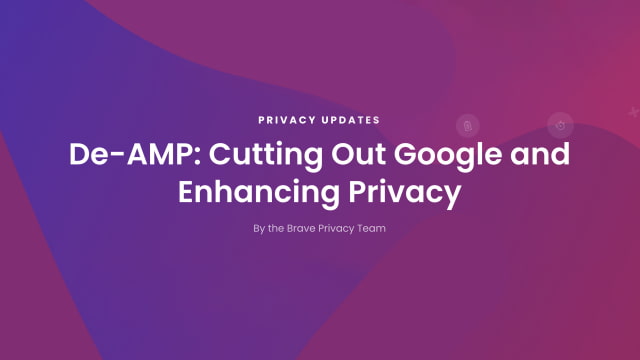